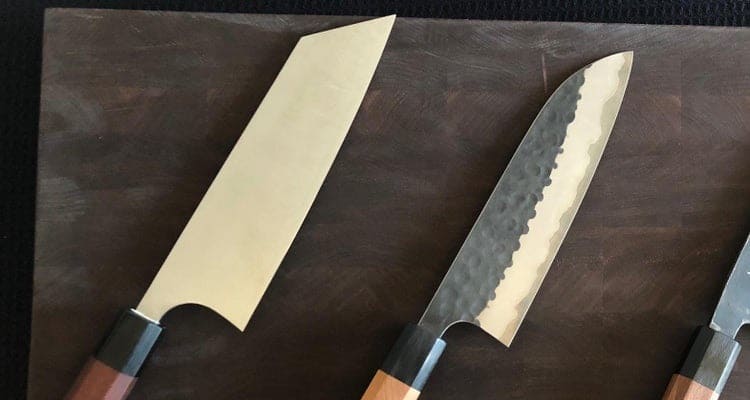 If you’ve ever heard of a Bunka before, then there’s no surprise that the existence of Santoku will not come as much shock to you. These Japanese knife types share many similarities, but it’s also important to know what separates them so you can make an informed decision about which blade suits your kitchen tasks best.

Who says you need to search any further? This article will cover all the necessary details on Santoku vs Bunka, and explore their similarities and differences.

What is a Santoku Knife best used for?

As I hinted earlier, the Santoku knife originated in Japan and has become popular in the United States over the past years. Today, many versions of the Santoku are being made in the US as well as other countries across the globe. Santoku, in Japanese, means ‘three uses’ or ‘three virtues’. The meaning represents the three types of cuts the knife is crafted for: dicing, slicing and mincing.

Besides, the Santoku blade, often made from high-carbon steel, boasts a flat cutting edge and a handle in line with the blade’s top edge. At the end of the blade is a rounded curve popularly referred to as a Sheepsfoot. This is a sharp departure from the sharp point often associated with Western blades and it also distinguishes the Santoku as a Japanese tool.

Most Santoku knives combine Western and Eastern designs, in that they are sharpened on both sides of the blade (double bevel), giving the chef the chance to cut with either side of the knife. This allows easier sharpening and maintenance with a pull-through or traditional steel sharpener.

However, some Santoku knives follow the traditional Eastern design and are sharpened on only one side of the blade (single bevel). This design provides the chef better control over the direction of cuts.

Typically, the Santoku knife, measuring between 4 to 9 inches, is suited to precision work due to its light and narrow blade that can deliver thinner cuts. Essentially, it slices through food in a forward and backward motion that allows less food to be pushed out of the way, leading to quick cuts. Thinner cuts also enhance the overall aesthetics of completed foods.

With the Santoku knife, you can easily slice cheese, dice fruits, mince fruit meat, or herbs, and do even more. A Santoku knife is a reliable multipurpose tool in any kitchen, whether home or professional.

What is a Bunka used for?

Bunka is another Japanese-style knife. In Japanese, it’s pronounced as Bunka Bōchō. While ‘Bunka’ refers to culture, ‘Bōchō’ translates to a kitchen knife. Essentially, Bunka Bōchō means a cultural kitchen knife. The name represents the traditional use of the knife to prepare cultural dishes in Japanese homes.

Today, some even refer to the Bunka as Banno Bunka Bocho. ‘Banno’, in Japanese, means convenient or multipurpose, underlining the versatility and convenience of the Bunka knife.

Moreover, the Bunka usually shares the same features as the Santoku knife. For instance, they both share a wide blade and predominantly straight cutting edge. However, their tips differ. The Bunka boasts a signature reverse Tanto angled tip, also referred to as a ‘k-tip’ point.

Measuring around 5 to 7 inches, the Bunka knife is typically shorter than some other kitchen knives, making it considerably easier and lighter to handle for seamless cuts. Also, this knife’s blade is typically double-beveled, but it still maintains a sharp edge. The blade is usually made from Damascus steel or high-carbon steels such as VG10, AUS10, Blue Steel, and White Steel.

Besides, the Bunka’s flat profile makes it well suited for push-cutting and tap-chopping techniques. However, the use of a rock-cutting motion is limited because of the lack of a curve at the blade’s front edge. With its pointed tip, the knife has a great ability to do intricate precision works such as scoring vegetables or brunoise cuts. The tip also helps to get under the sinew and fat of meat when doing light butchering work.

If you’re not that familiar to the different types of culinary cuts, here’s a helpful guide for you.

As we have noted before, both Santoku and Bunka knives share certain similarities but they also share a few differences that we will explain below:

By now, you’re aware of the Santoku’s great ability to slice through food and deliver very thin cuts. Santoku’s light and narrow blade allows you to leave thin slices and cut through vegetables and seafood for a nice recipe. However, don’t expect such thin slices from a Bunka knife due to the absence of a curve at the blade’s front edge.

If you need to mince foods into smaller bits for seasoning soups, sauces, salads, and other cuisines, the Bunka knife is the better fit. It minces food in a back and forth motion effortlessly while the Santoku falls short in this area. With the Bunka knife, you have the right tool to make minced meat.

The Santoku can dice fruits and vegetables like a pro — better than what Bunka can do. It’s got the perfect blade to dice in perfect, uniform pieces.

The Bunka knife boasts a pointed tip that makes it ideal for intricate precision works, whether it’s brunoise cuts or scoring vegetables. The Santoku can’t do precision works as well due to its flat cutting edge.

As evident in our article – Santoku vs Bunka – the main difference between the knives is the shape of their blade tip. While the Santoku has a curved tip, the Bunka features a reverse tanto tip. The different tips mark their differences in functions such as slicing, mincing, and precision work. Before making a choice, determine your needs and go for the knife that better serves them.