If you’re the type that regularly spends time outdoors, you know the value that a knife can bring. But sometimes, you want to have versatility without any of the bulk or weight that comes with it.

These Are The 15 Best Swiss Army Knives For Everyday Carry

Without further ado, here are the best options from Victorinox, the makers of the original and exceptional Swiss Army Knives. 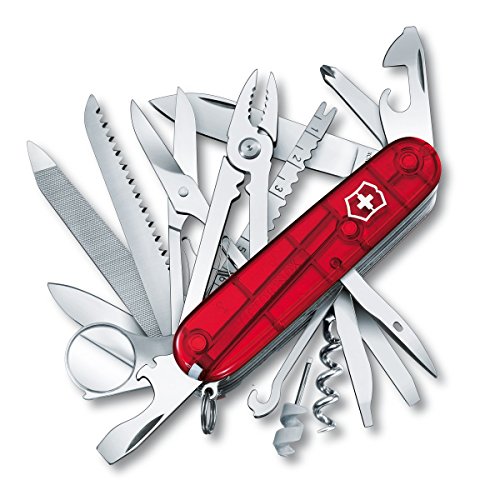 The SwissChamp isn’t called the “Champ” for nothing. This high-quality and comfortable Multi-Tool pocket knife is well worth the high price.

Other knives by Victorinox on this list are versatile. The SwissChamp, however, is on an entirely different level – over thirty different functions are included! Although some of the tools have a more practical use than others, as a whole, the versatility is hard to beat.

Not only that, but each of these tools is also made with high-grade and premium materials that keep the knife lightweight. Overall, the SwissChamp is well worth spending your hard-earned money on.

Even if I wasn’t a knife collector, the SwissChamp would definitely have a place in my toolbox. 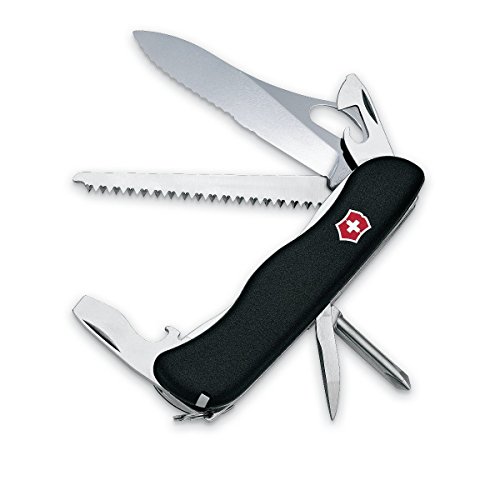 The Swiss Army One-Hand Trekker Pocket Knife may not seem like much at first glance. A few seconds of use, however, and you’ll realize how wrong you are. The Trekker is incredibly versatile with twelve different functions built-in. It’s built using durable materials while still leaving the blade, as a whole, comfortable to hold.

Each of the included tools is high quality and span a wide range of uses. The wood saw, however, is especially high quality and not usually seen in a Swiss Army Knife. It’s very long, with a 90-degree spine that is thicker than you would expect.

Overall, the Trekker was a complete surprise and better than I expected. 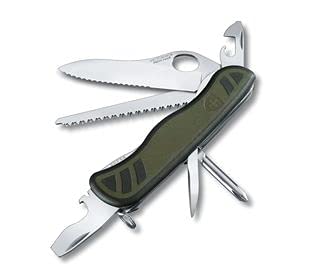 The Swiss Army Soldier Multi-Tool is, as you would expect, a very versatile pocket knife. For instance, the Multi-Tool comes with ten different tools – a Philips screwdriver, bottle opener, wood saw, wire stripper, and a few others too.

Its other defining feature is the actual blade itself. Unlike many other Swiss Army Knives at this price point, the Multi-Tool’s blade is actually serrated with a straight edge near the base.

Although the price is on the higher end, the versatility that you get from this knife is remarkable. Overall, this is a very good knife that is well worth having. 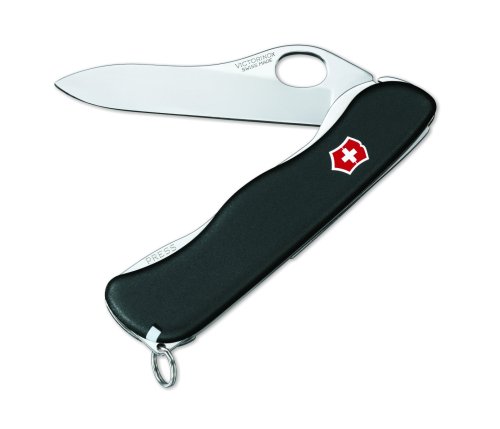 The Swiss Army One-Hand Sentinel is unique. It has a sleek design and is made of stainless steel. The handle is made using rugged polyamide scales for some extra durability.

There is a pocket clip attached to the rear of the knife and a key ring near the bottom. It’s a little stiff and was hard to open at first, although the stiffness did go away after a few uses.

Aside from the lock release which is awkwardly placed, the Sentinel is quite the pocket knife. The one I received was non-serrated, however, serrated versions are also available.

Overall, this is a product I would easily recommend to friends and family. 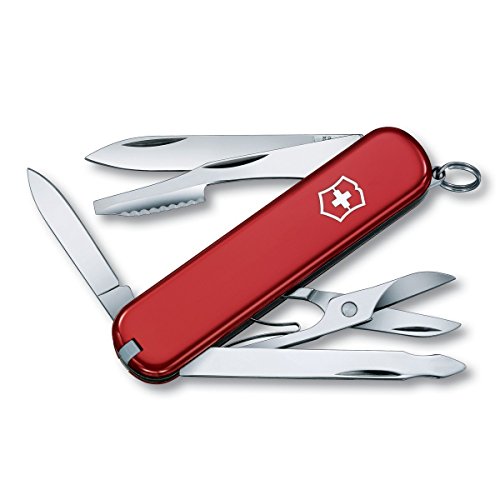 The Swiss Army Executive Knife is practical to use. It comes with ten different tools that all serve a different purpose. Each is also made with very durable stainless steel.

Unlike other Swiss Army Knives, however, the Executive comes with very few extravagant tools. The file, for instance, is of very low grit and not suited for nails like the file that other knives come with.

Even the material it’s made from is practical. Both the blade and handle are made with strong and high-quality material for a durable result. All-in-all, the Executive is a Swiss Army Knife that is perfect for anyone looking for a strong and practical pocket knife. 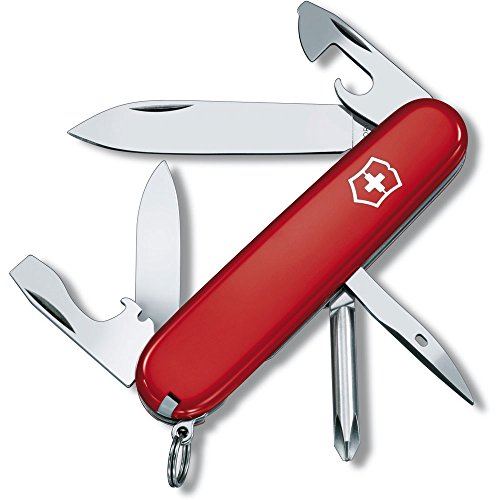 Like the Swiss Army Soldier, the Tinker is a very versatile pocket knife. Like it’s relative, the Tinker comes with a host of different tools.

Unlike the Soldier, however, the Tinker comes at a much lower price point. It’s especially apparent when you take into account the quality of the materials that this knife is made from.

Unfortunately, the Tinker does have a couple of flaws. Some of the tools, for instance, are stiff and difficult to pull out. Luckily, this does go away in time.

Overall, despite this, the Tinker is a very strong Swiss Army Knife that is well worth the low price. 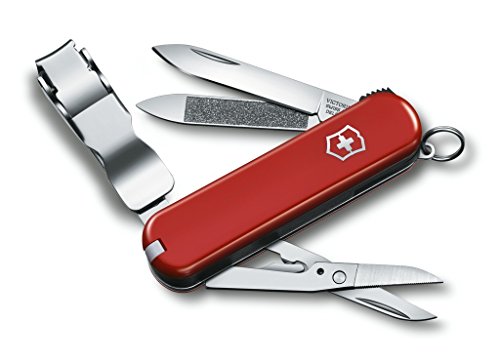 The Swiss Army Nail Clip 580 is perfect when it comes to keeping your finger nails in good condition. The clippers were incredibly sharp the first time I tried them out.

Honestly, I was a little surprised. The nail file was also better than I expected. It may, however, be a little too rough for some people. If I had to give a number, I would say it’s at the same level as some low grit sandpaper.

The rest of the tools – scissors, tweezers, toothpick and key ring – where of respectable quality, but that’s it. Still, the quality of the nail clippers are more than enough to make the Swiss Army Nail Clip 580 worth having.

What Is A Swiss Army Knife?

The Swiss Army Knife seems like your typical pocket knife at first glance. Ignore the various tools typical of the Swiss and you’ll be hard-pressed to find any noticeable differences. But at the same time, it’s because of these same tools that the Swiss Army Knife has become a cultural icon. In fact, the name itself is sometimes used as a term to express that something is versatile with a lot of utility.

And for good reason too. Nearly any Swiss Army Knife will usually have a variety of tools: Screwdrivers, nail files, can openers, and much more. Of course, it wouldn’t be a Swiss Army Knife without having an actual knife – although, some styles like the Swiss Army Nail Clip do lack one.

The Swiss Army Knife is fairly unique in the realm of knives. Specifically, it’s one of the few styles of knives that is only really produced by a single company. In the case of the Swiss Army Knife, that means Switzerland-based company Victorinox. Because of this, it’s usually fairly easy to find a reliable Swiss Army Knife.

Although like most knives, there a few things you can do to make it even easier.

For example, the tools that a specific style brings. Some, such as the SwissChamp, have a massive amount of tools. The price, however, can be a major turn-off. In that case, it’s not uncommon to choose a knife with a lower price that still has the tools you want.

Size, likewise, is another thing to look out for. A small knife may be easy to store, but the tools that it comes with will be equally as small. This may not seem like much, but can be a deciding factor if you’re stuck between knives.

Unsurprisingly, cost is as important to look at as always. Again, the SwissChamp may have a ton of versatility, but is it really better than the Executive? Cost, like size and function, comes with trade-offs that are important to understand.

Why Are Swiss Army Knives So Popular?

The Swiss Army Knife has earned its popularity for a reason. Its versatility, however, is only part of the whole story. Although, yes, it is a large part of it. The rest of it, however, isn’t to be underestimated. Versatility, alone, would not have been enough to give this knife its iconic place in culture.

How To Open A Swiss Army Knife?

Opening a Swiss Army Knife may seem like a complex task, but most are designed to allow you easy access to the inner tools. At the same time, however, it’s all too easy to accidentally hurt yourself on one of these other tools.

Sure, a nail file may not seem like much, but what about a fishhook or a can opener? A Swiss Army Knife is a useful tool, but it’s important to respect it as you would any other dangerous item.

These are the most common tools and uses of the Swiss Army Knife:

Can a Swiss army knife be used for self defense?

At the same time, however, the Swiss Army Knife does give you a lot of versatility. It may not be of much use directly, but you could easily find other uses for one and avoid having to deal with such a direct confrontation in the first place.

The Swiss Army Knife Is A Versatile Tool

The Swiss Army Knife is versatile. It’s practical. It’s unique. But is it for you? That depends, are you someone looking for the perfect balance of price and function? The Swiss Army Trekker may be for you then.

But maybe you’re someone looking for practicality instead? In that case, it’s time to start looking at the Executive instead.

No matter your needs, the Swiss Army Knife is a knife that is versatile enough to be a perfect fit for anyone.

Last update on 2022-01-12 at 08:50 / Affiliate links / Images from Amazon Product Advertising API. As an Amazon Associate I earn from qualifying purchases.