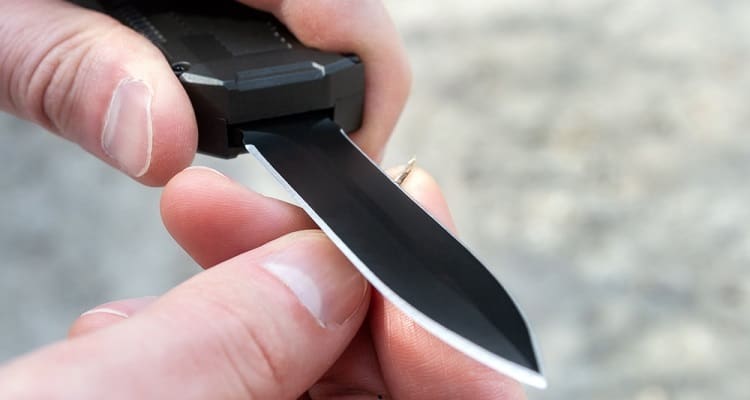 I’ve already held so many knives in my hand having different handle types, blade styles, and sizes. Yet one of the knives that fascinated me the most is the OTF knife.

To give you an idea, an OTF knife is some sort of a switchblade or an automatic knife. Its blade only comes out when activated through a switch or a button on the handle.

An OTF knife, however, has distinct characteristics that set it apart from other automatic knives. And today, I will share how it differs from other knives, how it works, as well as the things you need to consider when buying one.

But first, let’s get to know what OTF really is.

What does OTF knife stand for?

OTF stands for Out-the-Front. The blade of an OTF knife emerges from the front of the handle with a switch or a button.

You have probably encountered or even held an OTF knife yourself. Its opening mechanism works like a utility knife or a box cutter. But unlike these two, there is so much more to know about the OTF knife which we’ll tackle on the next sections.

How to use an OTF knife?

Once opened, OTF knives function like any other folding and lock back knives. You can use it for the same purposes, such as cutting tasks at work, hobbies or outdoor uses for fishing, hunting, and camping.

The main advantage of an OTF knife, however, is its ability to be opened with one hand. OTF allows you to have a free hand to hold or position the material to be cut, and delay opening the blade until immediately needed.

How do out-the-front (OTF) knives work?

The blade of an OTF knife is hidden until you trigger its switch. Its spring mechanism is activated by pushing a switch, button, or fulcrum lever you can find on the OTF knife’s handle.

OTF knives, like firearms, can be single action or double action. With a single action OTF knife, once the blade is deployed, the knife must be manually closed using a cocking lever or rod to compress the spring mechanism for the next opening.

What should you look for in an OTF knife?

The first thing to consider for an OTF knife is its intended use. Aside from the opening mechanism, be it single or double action, all the characteristics of a good knife must come into play when selecting an OTF knife.

Here are a few of the other factors you should consider when buying an OTF knife.

A single edge blade having only one cutting edge, maybe better for your usual cutting works. One point to keep aware of, a single edge adds a measure of safety. It can eliminate the unintentional cutting of other objects or surfaces, especially when working in tight spaces. Also, the tip or point of a single edge is stronger than the point of a double edge blade.

For self-defense purposes, you can opt for a double edge blade since this kind of blade has sharp edges on both sides. Obviously, this type of blade gives you more options against an adversary, making it the best OTF knife for self-defense.

You should also consider an OTF knife having good quality steel to retain a sharp edge that could hold up to your everyday use. Also, you have to remember that unlike fixed blades, your OTF knife twitches more often. Thus, you must not be concerned with the blade alone. You also have to look at the quality, durability, and workability of its handle and switch.

Consider what type of opening mechanism you want for your OTF knife. You can choose between a single or a double action OTF knife. When it comes to the trigger, you can have a button, a switch or a lever method of opening.

Since the main purpose of having an OTF knife is quick, easy one-handed deployment, you may choose a double-action knife opened with a thumb switch. Also, look for an OTF knife having a reliable locking mechanism that securely holds the blade in both open and closed positions.

Finally, consider the handle size and material, including one with an adequate grip surface when used in wet or outdoor conditions. Make sure that the OTF’s handle protects the blade and the spring from water, sand, and dirt.

For all folding knives, I always ensure that there is a properly shaped bolster with adequate thickness to prevent my hand from slipping forward from the handle towards the blade. This is an even more important safety feature when considering an OTF knife for self-defense. Overall, the best OTF knife is one that feels right in your hand and suits your purpose well.

Switchblade knives, which use a spring mechanism to open the knife, have been around since the mid-1800s.

As the world’s militaries began to stand up parachute troops in the lead up to World War Two, armies recognized the need for high-quality automatic knives with reliable mechanisms.

Automatic knives were used to cut away tough shroud lines on malfunctioning parachutes while in the air, in order to safely deploy a secondary parachute. This need led to the first quality mass production of switchblades, which included OTF knives.

In the mid-20th century, due to criminal use that was hyped by popular myth and culture, strong restrictions and outright bans were implemented against automatic knives. This has changed in the last few decades but there are still myths surrounding OTF knives as to the legality of owning and using one.

OTF knives are either outright or practically illegal in a handful of states and the District of Columbia. Some of these states allow possession and use for people with disabilities. In all other states, simple possession is legal.

Due to the now widespread legality of these knives, several large and well-known knife manufacturers have been producing high-quality OTF knives for several years, including Benchmade, Smith & Wesson and Schrade, just to name a few.

An OTF knife is one type of switchblade or automatic knife, but here’s how it differs from the knives of the same type:

Using a broad definition, Gravity knives include older designs such as balisong or butterfly knives. As the name implies, these knives us the force of gravity and hand motion to open and lock in place.

These automatic knives open out of the side of the knife handle, in a similar manner to all other folding knives.

Out the Front (OTF) Knives

While these knives are similar to traditional switchblades, OTF knives emerge their blades from the front of the knife. OTF knives come in two different versions, related to the opening and closing mechanism as follows:

Why should you carry an OTF knife?

Only OTF knives allow the user to retain a full, firm grip on the knife handle during the opening, ensuring the knife is immediately ready for use as soon as the blade deploys. This is not only highly desirable in tight workspaces or complicated situations but is critical in self-defense uses.

OTF knives are also ideal for people with reduced grip strength. For me, a double-action OTF knife is the best OTF knife as it offers all the advantages possible from the design, including a complete single-hand function for both opening and closing.